While the course home page serves as an organizational template for what you have done in the course, there are always going to be differences between what was on the webpage and what you did. Here we will create a document that will highlight exactly what tutorials you did to go along with the home page. Additionally, throughout the course you have been running anything of substance (ie programs and scripts) on iDev nodes, but as mentioned several times, using the idev nodes is not how you will typically want to interact with TACC.

This tutorial aims to:

In Thursday's class, there was some impromptu discussion/confusion about differences between the different types of compute nodes (development vs normal) and how the reservation we've been using this week related to the different types of nodes. The LS5 user guide includes some great information that tries to speak to people both well versed in computer science and those that aren't. They provide the following figure to describe how the resources at ls5 are laid out which while accurate and helpful doesn't describe 3 key things that are always helpful to think about:

After some internal debate, I decided to generate what I'm considering to be a similar figure that highlights the things that I think are important (specifically the 3 things I feel the above doesn't convey), and label things with the terms I use to think about them. As mentioned several times, my background is biology, not computer science, and ultimately I think slightly inaccurate descriptive terms may help clear up some of the confusion.

Submitting a job to the queue is my (and should be your) default position for several reasons:

There are times that I do use idev nodes:

If idev is so rare why did we use it in the class:

First, running in interactive mode gives you some comparison of how different programs work. Think back on your runs this week, what programs/commands printed information to the screen that had useful information (read trimming, read mapping come to my mind), what programs didn't (mpileup, indexing, file conversions), and what programs had large amounts of information but wasn't directly needed or evaluated (breseq). This may help you decide when there are things you want to capture and when you should expect empty files.

Second, it speeds the class up. No matter what output is generated when you execute a command, you get your command prompt back when the command is done, and you can immediately interrogate the results rather than waiting and guessing when your job starts, and when it finishes.

Finally, throughout the course we made use of the reservation system which allowed us to skip the queue and immediately get an idev session or job running. In previous years where reservations weren't possible tutorials were planned around a:

I hope you can see that using idev nodes has enabled each of you to accomplish more tutorials than previous years while hopefully learning more. Generally, the feedback from students who have taken the course under this type of format has been positive, so if you find that you are overly reliant on idev nodes or have a hard time transitioning to submitting jobs, I'd love to hear the feedback so I can attempt to modify things further.

Good citizenship on the head node

When you log into lonestar using ssh you are connected to what is known as the login node or "the head node". There are several different head nodes, but they are shared by everyone that is logged into lonestar (not just in this class, or from campus, or even from texas, but everywhere in the world). Anything you type onto the command line has to be executed by the head node. The longer something takes to complete, or the more it will slow down you and everybody else. Get enough people running large jobs on the head node all at once (say a classroom full of summer school students) and lonestar can actually crash leaving nobody able to execute commands or even log in for minutes -> hours -> even days if something goes really wrong. To try to avoid crashes, TACC tries to monitor things and proactively stop things before they get too out of hand. If you guess wrong on if something should be run on the head node, you may eventually see a message like the one pasted below. If you do, its not the end of the world, but repeated messages will become revoked TACC access and emails where you have to explain what you are doing to TACC and your PI and how you are going to fix it and avoid it in the future.

Recall this is the type of message that I have gotten when working with downsampled data on the head node and lead me to start an idev session to figure out what is going on.

Submitting jobs to the queue

Every job you submit will have 2 parts:

Access to nodes (regardless of what queue they are in) is controlled by a "Queue Manager" program. You can personify the Queue Manager program as: Heimdall in Thor, a more polite version of Gandalf in lord of the rings when dealing with with the balrog, the troll from the billy goats gruff tail, or any other "gatekeeper" type. Regardless of how nerdy your personification choice is, the Queue Manager has an interesting caveat: you can only interact with it using the  sbatch command. "sbatch filename.slurm" tells the que manager to run a set job based on information in filename.slurm (i.e. how many nodes you need, how long you need them for, how to charge your allocation, etc). The Queue manager doesn't care WHAT you are running, only HOW you want to run it. 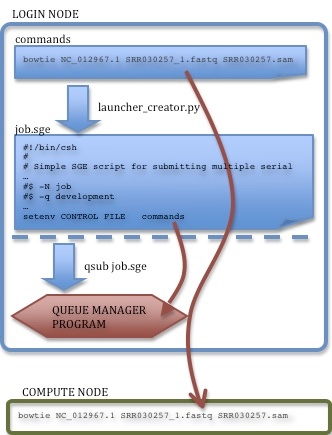 The easiest way to deal with slurm files is using the launcher_creator.py script. In some cases I have copied slurm files back to my $HOME directory when I anticipate changing the information in it in specific ways in the future (such as changing the number of samples I will run through breseq)

Running the launcher_creator.py script with the -h option to show the help message so we can see what other options the script takes:

How to display all available options of the launcher_createor.py script. Hopefully the idea of using a -h option to a program is second nature to you after this week.  Expand source

The lines highlighted in green and yellow are what you should focus on:

How does Dan make commands files?

Adding >& symbol to the end of a command followed by a file name is very useful. This results in redirecting what would normally print to the screen as either the standard output and the standard error streams to a file that follows. This can be very useful for determining where/why a particular sample failed as it sorts it into a specific file based on the sample being analyzed. This behavior is demonstrated in the trimmoatic tutorial as well as the advanced breseq tutorial.

The same information will be found in the .o<jobID> and .e<jobID>, but the output and error streams will be mixed together among all simultaneously running commands.

Now that we have an understanding of what the different parts of running a job is, let's actually run a job. Our goal of this sample job will be to provide you with something to look back on and remember what you did while you were here. As a safety measure, you can not submit jobs from inside an idev node (similarly you can not run a commands file that submits new jobs on the compute nodes). So check if you are on an idev node (showq -u or hostname), and if you are on an idev node, logout before continuing.

For this tutorial, the data that you will be using will be the tutorials you have already completed in the class. Similar to the "first job" you put together on the first day this "last day" job will generate a text file to remind you of what you did rather than highlighting basic commands.

Setting up your run

Navigate to the $SCRATCH directory before doing the following.

Commands to get to the where the data is and launch nano editor
Sample commands that can be pasted into nano
THESE are not typed, these are the keys to press to save the file after you have entered it in nano
Use wc -l command to verify the number of lines in your commands file.

If you get a number larger than 21 edit your commands file with nano so each command is a single line as they appear above. Several of the lines are likely long enough that they will wrap when you paste them in nano and cause problems

Sample commands that can be pasted into nano

Based on our example you may have expected 1 new file to have been created during the job submission (GVA2020.output.txt), but instead you will find 2 extra files as follows: what_i_did_at_GVA2020.e(job-ID), and what_i_did_at_GVA2020.o(job-ID). When things have worked well, these files are typically ignored. When your job fails, these files offer insight into the why so you can fix things and resubmit.

Many times while working with NGS data you will find yourself with intermediate files. Two of the more difficult challenges of analysis can be trying to decide what files you want to keep, and remembering what each intermediate file represents. Your commands files can serve as a quick reminder of what you did so you can always go back and reproduce the data. Using arbitrary endings (.out in this case) can serve as a way to remind you what type of file you are looking at. Since we've learned that the scratch directory is not backed up and is purged, see if you can turn your intermediate files into a single final file using the cat command, and copy the new final file, the .slurm file you created, and the 3 extra files to work. This way you should be able to come back and regenerate all the intermediate files if needed, and also see your final product.

Here are some of the common commands that you can run and what they will do or tell you:

There will be something you use quite often working on your own data.

SUs on TACC and allocations

SUs or "service units" are a currency TACC uses to control access and encourage everyone to engage in the best behaviors. For information on applying for an allocation at TACC, visit https://portal.tacc.utexas.edu/allocations-overview. It is my understanding (which may be flawed) that this is a very easy process for UT faculty, and possibly more difficult for external academic researchers, but still be possible potentially requiring you to go through https://portal.xsede.org/submit-request#/login which is linked from the allocations overview page above. In my experience, the people at TACC are awesome at helping people through these types of processes and ticket requests through the TACC user portal are a great way to start the process.

Each job (including idev sessions) uses SUs at a given rate. SUs are deducted from your balance based on the time, type, and number of nodes you occupy, NOT the time requested.  More information can be found here. This represents an additional reason submitting a job is better practice than idev nodes most of the time: they cost less. Not because they are charged differently, but rather, a submitted job is charged based on exactly how long the commands take to execute while idev sessions have waiting between executing commands and you must remember to log out at the end of it to stop the billing.

Return to GVA2020 to work on any additional tutorials you are interested in.