Get set up for the exercises

Bedtools is a great utility for working with sequence features and mapped reads in BAM, BED, VCF, and GFF formats.

We are going to use it to count the number of reads that map to each gene in the genome. Load the module and check out the help for bedtools and the multicov specific command that we are going to use:

Let's fix the one chromosome that is differently named in the gtf file- mitochondrion.

In order to use the bedtools command on our data, do the following:

HTseq is another tool to count reads. bedtools has many many useful functions, and counting reads is just one of them. In contrast, HTseq is a specialized utility for counting reads.  HTseq is very slow and you need to run multiple command lines in order to do the same job as what bedtools multicov did. However, if you are looking for more fine grained control over how to count genes, especially when a read overlaps more than one gene/feature, htseq-count would be an option. 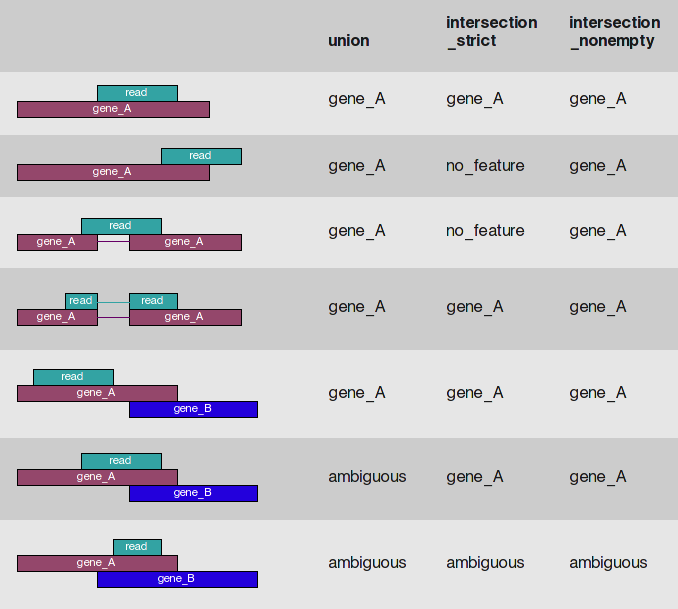 Htseq is a module on stampede2, but not part of biocontainers. Module spider htseq shows us the way to use htseq is to access it from TACC_HTSEQ_BIN.

IMPORTANT NOTE:  By default, htseq assumes your reads are stranded and will only count the reads that map in the same direction as the feature. If you have unstranded data or if you want to count reads mapping in all directions (maybe to detect antisense genes), use --stranded no option. If you have truseq data which uses dUTP method for creating stranded libraries, your reads will actually be in reverse direction when compared to the feature. So, use --stranded reverse.

Let's just take a look at the commands

Then take a peek at the results...

HTseq-count is strand-specific in default. Therefore, read counts for each gene in gene_counts_HTseq.gff are approximately a half counts in gene_counts.gff for the corresponding gene.

Bedtools output file will be a tab-delimited file with all columns of the gtf/gff file (annotation file) followed by a count column for every input sample .

Columns for our output file are the following (the columns newly added by bedtools in bold):

HTSeq output file (after concatenation) will be a tab-delimited file with the feature name followed by a count column or every input sample.

Columns for our output file are the following

Gene Counting If you Mapped to the Transcriptome

eXpress (https://pachterlab.github.io/eXpress/manual.html) is a feature quanitification tool that is useful if you mapped RNA-Seq to the transcriptome (and didn't use a pseudoaligner like kallisto).

If you want to perform all above operations in R enviornment, GRanges (along with Rsamtools) is a useful option. An example vignette is available here. featureCounts is also a great option  (http://bioinf.wehi.edu.au/featureCounts/). Kallisto is also a great transcript quantification option.

Let's look at how to check for differential expression now.