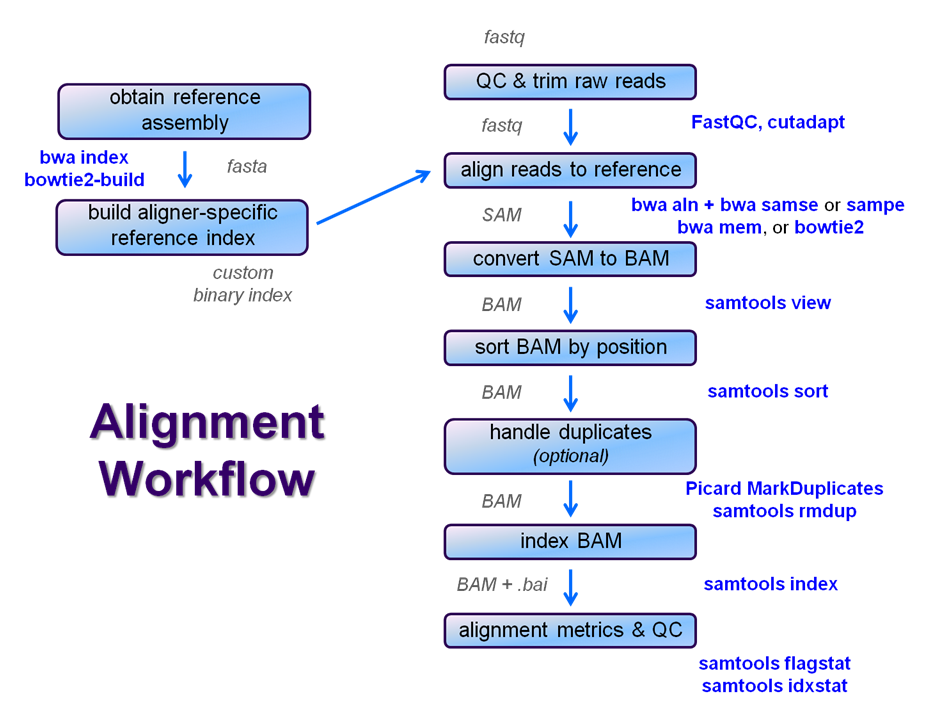 After raw sequence files are generated (in FASTQ format), quality-checked, and pre-processed in some way, the next step in many NGS pipelines is mapping to a reference genome.

Even though many mapping tools exist, a few individual programs have a dominant "market share" of the NGS world. In this section, we will primarily focus on two of the most versatile general-purpose ones: BWA and Bowtie2 (the latter being part of the Tuxedo suite which includes the transcriptome-aware RNA-seq aligner Tophat2 as well as other downstream quantifiaction tools).

First connect to stampede2.tacc.utexas.edu and start an idev session. This should be second nature by now

Before we get to alignment, we need a reference to align to. This is usually an organism's genome, but can also be any set of names sequences, such as a transcriptome or other set of genes.

It is often useful to know what chromosomes/contigs are in a FASTA file before you start an alignment so that you're familiar with the contig naming convention – and to verify that it's the one you expect.  For example, chromosome 1 is specified differently in different references and organisms: chr1 (USCS human), chrI (UCSC yeast), or just 1 (Ensembl human GRCh37).

There are many aligners available, but we will concentrate on two of the most popular general-purpose ones: bwa and bowtie2. The table below outlines the available protocols for them.

We will perform a global alignment of the paired-end Yeast ChIP-seq sequences using bwa. This workflow has the following steps:

We're going to skip the trimming step for now and see how it goes. We'll perform steps 2 - 5 now and leave samtools for a later exercise since steps 6 - 10 are common to nearly all post-alignment workflows.

Like other tools you've worked with so far, you first need to load bwa. Do that now, and then enter bwa with no arguments to view the top-level help page (many NGS tools will provide some help when called with no arguments). Note that bwa is available both from the standard TACC module system and as BioContainers. module.

As you can see, bwa include many sub-commands that perform the tasks we are interested in.

We will index the genome with the bwa index command. Type bwa index with no arguments to see usage for this sub-command.

Now, we're ready to execute the actual alignment, with the goal of initially producing a SAM file from the input FASTQ files and reference. First prepare a directory for this exercise and link the sacCer3 reference directories there (this will make our commands more readable).

Recall the format of a SAM alignment record:

The SAMtools program is a commonly used set of tools that allow a user to manipulate SAM/BAM files in many different ways, ranging from simple tasks (like SAM/BAM format conversion) to more complex functions (like sorting, indexing and statistics gathering).  It is available in the TACC module system (as well as in BioContainers). Load that module and see what samtools has to offer:

The samtools view utility provides a way of converting between SAM (text) and BAM (binary, compressed) format. It also provides many, many other functions which we will discuss lster. To get a preview, execute samtools view without any other arguments. You should see:

Looking at some of the alignment record information (e.g. samtools view yeast_pairedend.bam | cut -f 1-4 | more), you will notice that read names appear in adjacent pairs (for the R1 and R2), in the same order they appeared in the original FASTQ file. Since that means the corresponding mappings are in no particular order, searching through the file very inefficient. samtools sort re-orders entries in the SAM file either by locus (contig name + coordinate position) or by read name.

Many tools (like IGV, the Integrative Genomics Viewer) only need to use portions of a BAM file at a given point in time. For example, if you are viewing alignments that are within a particular gene, alignment records on other chromosomes do not need to be loaded. In order to speed up access, BAM files are indexed, producing BAI files which allow fast random access. This is especially important when you have many alignment records.

Since the BAM file contains records for both mapped and unmapped reads, just counting records doesn't provide information about the mapping rate of our alignment. The samtools flagstat tool provides a simple analysis of mapping rate based on the the SAM flag fields.

More information about the alignment is provided by the samtools idxstats report, which shows how many reads aligned to each contig in your reference. Note that samtools idxstats must be run on a sorted, indexed BAM file.

Now that you've done everything the hard way, let's see how to do run an alignment pipeline using a BWA alignment script maintained by the BioITeam,  /work2/projects/BioITeam/common/script/align_bwa_illumina.sh. Type in the script name to see its usage.

The alignment log will have a  "I ran successfully" message at the end if all went well, and if there was an error, the important information should also be at the end of the log file. So you can use tail to check the status of an alignment. For example:

The <prefix>.samstats.txt statistics files produced by the alignment pipeline has a lot of good information in one place. If you look at bwa_global.samstats.txt you'll see something like this:

The great thing about pipeline scripts like this is that you can perform alignments on many datasets in parallel at TACC, and they are written to take advantage of having multiple cores on TACC nodes where possible.