Use our summer school reservation (CoreNGSday5) when submitting batch jobs to get higher priority on the ls6 normal queue today:

As we have seen, the SAMTools suite allows you to manipulate the SAM/BAM files produced by most aligners. There are many sub-commands in this suite, but the most common and useful are:

Since BAM files are binary, they can't be viewed directly using standard Unix file viewers such as more, less and head. We have seen how samtools view can be used to binary-format BAM files into text format for viewing. But samtools view also has options that let you do powerful filtering of the output. We focus on this filtering capability in this set of exercises.

The most common samtools view filtering options are:

Login to ls6.tacc.utexas.edu and start an idev session.

Next set up a directory for these exercises, and copy an indexed BAM file there. This is a renamed version of the yeast_pairedend.sort.bam file from our Alignment workflow exercises.

Meaning of each bit (flag) in the SAM alignment records flags field (column 2). The most commonly flags are denoted in red.

Format of the CIGAR string in column 6 of SAM alignment records. 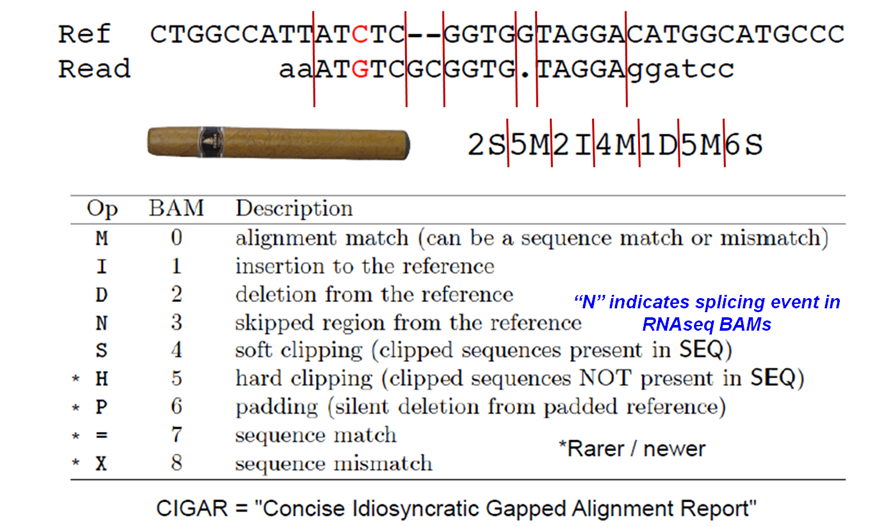 Analyzing the CIGAR string for indels

Suppose we want to know how many alignments included insertions or deletions (indels) versus the reference. Looking at the CIGAR field definition table above, we see that insertions are denoted with the character I and deletions with the character D. We'll use this information, along with samtools view, cut and grep, to count the number of indels.

We'll do this first exercise one step at a time to get comfortable with piping commands. Start by just looking at the first few alignment records of the BAM file:

With all the line wrapping, it looks pretty ugly. Still, you can pick out the CIGAR string in column 6. Let's select just that column with cut:

Next, make sure we're only looking at alignment records that represent mapped reads. The -F 0x4 option says to filter records where the 0x4 flag (read unmapped) is 0, resulting it only mapped reads being output.

Now we use grep with the pattern '[ID]' to select lines (which are now just CIGAR strings) that have Insert or Deletion operators. The brackets ( [ ] ) denote a character class pattern, which matches any of the characters inside the brackets. Be sure to ask for Perl regular expressions (-P) to be sure that this character class syntax is recognized.

Ok, this looks good. We're ready to run this against all the alignment records, and count the results:

Count reads that mappedi with indels

What is that in terms of the rate of indels? For that we need to count the total number of mapped reads. Here we can just use the -c (count only) option to samtools view.

There should be 547664 mapped alignments.

Knowing these two numbers we can just divide them, using awk (remember, bash only does integer arithmetic). Because we're not piping anything in to awk, any body we specify won't be executed. So we do the math in the BEGIN section:

In addition to the rate, converted to a percentage, we also output the literal percent sign ( % ). The double quotes ( " ) denote a literal string in awk, and the comma between the number and the string says to separate the two fields with whatever the default Output Field Separator (OFS) is. By default, both awk's Input Field Separator (FS) is whitespace (any number of space and Tab characters) and its Output Field Separator is a single space.

So what if we want to get fancy and do all this in a one-liner command? We can use echo and backtick evaluation to put both numbers in a string, then pipe that string to awk. This time we use awk body code, and refer to the two whitespace-separated fields being passed in: total count ($1) and indel count ($2).

awk also has a printf function, which can take the standard formatting commands (see https://en.wikipedia.org/wiki/Printf_format_string#Type_field).

Sometimes you just want to examine a subset of reads in detail. Once you have a sorted and indexed BAM, you can use the coordinate filtering options of samtools view to do this. Here are some examples:

When you're interested in mapped reads (which is true most of the time) be sure to specify the -F 0x4 option, which says to filter records where the 0x4 flag (read unmapped) is 0, resulting it only mapped reads being output.

You can also provide a BED-format file with one record for each desired overlap region: samtools view -L <bed_file>. This is a quick way to perform one of the functions of bedtools intersect.

Since you will find yourself wanting to interpret the flags field, and it's easier to do that when it is represented as hexadecimal, let's use awk to help do that.

Exercise: How many of the chrI:1000-2000 alignments are from properly paired mapped reads?

Hint 1 (building on the last command)

Also, using '$' in a grep pattern anchors the pattern to the end of the line (only patterns matching before a linefeed are printed).

Answer 1 (building on the last command)

Here's one way to do it, building on our last command line:

Note that here we don't need the line continuation character because the newline after the first single quote is part of the script command string.

Here's another way of doing it:

Mapping qualities are a measure of how likely a given sequence alignment to its reported location is correct. If a read's mapping quality is low (especially if it is zero, or mapQ 0 for short) the read maps to multiple locations on the genome (they are multi-hit or multi-mapping reads), and we can't be sure whether the reported location is the correct one.

Aligners also differ in whether they report alternate alignments for multi-hit reads. Some things to keep in mind:

Here are some examples of how different aligners handle reporting of multi-hit reads and their mapping qualities:

Using our yeast_pe.sort.bam file, let's do some some quality filtering.

Note that we use the -b flag to tell samtools view to output BAM format (not the SAM format text we've been looking at).

Exercise: How many records are in the filtered BAM compared to the original? How many read pairs does this represent?

Since we have only properly paired reads, the filtered BAM will contain equal numbers of both R1s and R2s. So the number of read pairs is 456890/2 or 228451.

Exercise: How many primary aligned reads (0x100 = 0) are in the bwa_local.sort.dup.bam file?

samtools view only pays attention to one -F or -f option, so to specify more than one flag value you need to combine them into one number. For example, combining 0x100 and 0x4 yields 0x104.