Genome Variation typically means variation of individual genomes within a species. Variation between species is the realm of phylogenetics and/or comparative genomics.

Side notes on variants

"Larger scale" is usually defined relative to the capabilities of the technology; for example, a "small indel" usually means "detectable within a single sequence read". In 2009, sequence reads were about 50 bp but in 2011 they were 100 bp.

More classic variants such as microsatellites, STRP's, and Alu's, can be somewhat more difficult to detect with NGS because their length is just slightly beyond typical NGS read lengths but shorter than what could be reliably detected with paired-end sequence data given the variation in fragment lengths with NGS. Fortunately, these methods were usually proxies for the functional genetic polymorphisms which can now be detected directly with NGS. 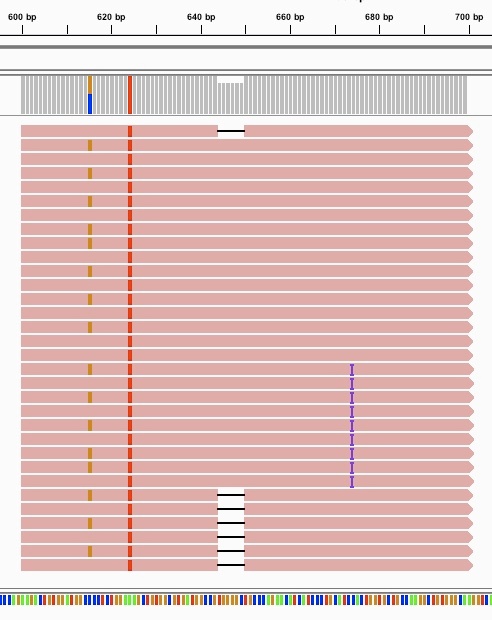 Would you believe me if I told you this data were from a normal individual mammalian genome?

It's obviously not diploid - the various heterozygous features should associated to 2 alleles; this diagram shows 6! The SNP at 615 is associated with both forms of the deletion AND both forms of the insertion. This would not be expected from normal tissue from a single individual. But it could represent: a) a mixed population of individuals, b) a mixed population of mutated cells, e.g. cancerous tissue, or c) a hexapolid (or greater) genome.

Variant analysis is almost always comparative, whether comparing variation rates, tracking traits, or looking for causal mutations. These comparisons can start with tools to analyze BAM files to identify putative variants (the Variant Caller) and then continue into more detailed annotations (the Variant Annotator).

We will introduce you to all these stages; keep in mind that this course makes no assumption about the genome you're analyzing - it could be: