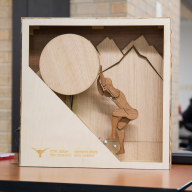 We selected the goal of producing a bipedal walking mechanism. A "human-like" gait would be preferred, but human structure and mechanics are not necessarily the easiest way to achieve this. We considered several methods of producing walking motion, including several bar-linkage mechanisms and one cable-driven mechanism. After some consideration, we created a four-bar mechanism that produced the motion we desired. We then discovered the almost identical Chebyshev Lamda Mechanism, the analytical equivalent of our empirical solution, and we modified our design to match that. After designing, building, and testing several iterations of our leg, drive, and counterweight subsystems, we assembled a final robot that walks and balances reliably on flat terrain.